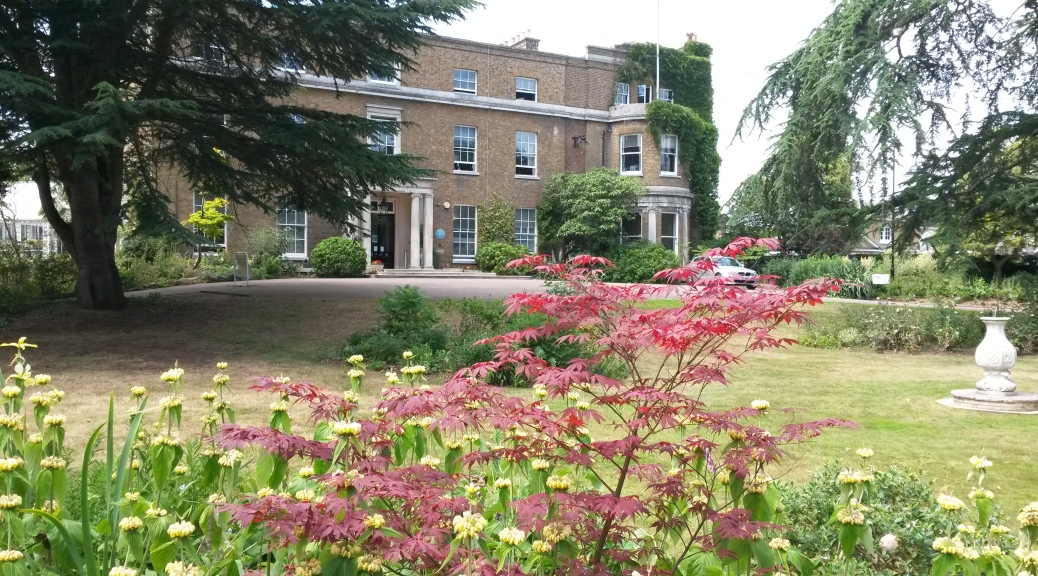 This is a large Georgian house and grounds which used to belong to the famous gardener and plant breeder Edward Augustus Bowles. Now it is the headquarters of the Lee Valley Regional Park Authority. The garden is open to the public, entrance is free but there are modest parking charges in the car park.

I visited the park over 20 years ago and I was then unimpressed by the general standard of maintenance and the lack of any plants of interest. Now that is long past. It has undergone a rejuvenation and there is plenty to admire in the park-like surroundings of the house, the lake filled with water lilies and the fruit and vegetable gardens at the far end of the garden.

You can easily spend enjoyable hours here. There is a cafe, a plant shop and plenty of information on the history of the garden.

Unfortunately the large cedar tree to the left in the main image above has recently been removed as it was unsafe. But that is the way with gardens – nothing can remain the same.

The gardener at Myddleton House clearly has an interest in succulents, many of which are unlikely to be hardy but are planted out in the summer. This is a bed which you must pass on the route from the car park which contains some has lovely echeverias, aeoniums and aloes.

A particular favourite seems to be the fan aloe (Aloe plicatilis). These are widely planted in pots and around the garden. They will probably never manage to become very large – they have not over the last couple of years – but they are attractive when small too.

Beyond the pond, which is packed full of water lilies, there is a curved border where the New River – a 17th century canal which supplied London with drinking water – used to run. It still runs nearby and is used by Thames Water. And close to that, there’s an enormous wisteria with its roots in a wall which must be as old as the house.

Some of the most interesting parts of the grounds are the orangery, next to the house, and the glass houses, vegetable and fruit plots at the far end of the garden.

A novel combination of Melianthus major and Crinum powellii next to the orangery in 2017.

A fine display of summer bedding in 2017.

Here next to glasshouses is the garden’s famous iris collection. Unfortunately I’ve never seen it in flower. The garden collects only those which won the Dykes Iris Society medal, an award given by the British and American Iris societies in memory of William Rickatson Dykes, author of an authoritative book on irises published in 1914. Unfortunately some of my favourite irises, including those bred by Arthur Bliss and Cedric Morris, are not included!

An attractive Phytolacca, probably P. polyandra, flowering in June 2015. These are American and East Asian plants which are apparently prepared as food by some native tribes. They produce tempting rich purple berries. However, they are generally toxic and full of alkaloids.

This is the market cross which used to be in Enfield Town market place. Apparently Bowles rescued it from a builder’s yard and had it erected in his garden. Well done Eddie!

A fine newly planted avenue of fruit trees in 2017.

The vegetable garden, which was crawling with pumpkins in August 2017.

The glasshouses are well kept –

and there’s plenty to see under glass.

Scadoxus multiflorus, an African bulb flowering in the glasshouse

Tulbaghia violacea, also known as society garlic. I’ve seen it widely planted for bedding in the Mediterranean but originates from South Africa.

Rotheca myricoides, an African plant called by some ‘butterfly bush’.

Fuchsia Checkerboard, one of my favourites.

Citrus in bloom and fruit.

Perhaps an unwelcome addition to the garden, deadly nightshade Atropa belladonna. A wild British plant that is very poisonous.

This site uses Akismet to reduce spam. Learn how your comment data is processed.

A new voice about plants and gardens